It's Time to Get Thinking!
We all know that our students need time to cultivate their minds for critical and creative thinking.  I am always struggling to find time to fit these types of activities in to my daily routine, so I compiled a list of short and snappy (less than 5 minutes, in most cases) activities that get my class THINKING and ENGAGED!  Some of these are new and some are old, but perhaps you might pick up a tip to use with your class tomorrow. 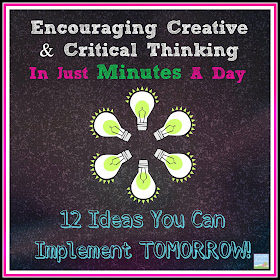 My final activity has to do with fluency of thought.  Students are all familiar with fluency in reading, but we need to practice our fluency of thought as well.  These types of activities are also great for active listening practice.  We practice this by giving the students a letter and a category.  For instance, I might say "A" nouns.  Then, the students have to go around the room and each give a noun that starts with the letter A.  There can't be more than a two second lag, or our fluency of thought has been broken.  They also can't repeat a noun twice.

We also do this with story telling.  I start out a story like, "I couldn't believe when I opened my door and saw..." and then a student carries on the next sentence or event, leaving off at a crucial point.  This requires that students are listening the ENTIRE time and are ready to jump in and contribute to the story telling at any time.  Such fun, even if the story only lasts through 10 students.